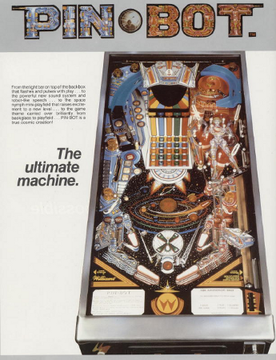 Pin-Bot is a pinball machine released by Williams in October 1986. It was designed by Python Anghelo and Barry Oursler

PINBOT was one for the ages. PINBOT was, as far as I could tell, a malevolent robot intelligence that has taken over the world (Your mind? Your room? Your arcade?), and you must use your pinball skills to give him eyes and a soul to talk him down from his automated destruction. Or maybe that was just the narrative I constructed in my mind while playing. Whatever the reason, PINBOT was way fun.

PINBOT also had a robot voice that would, once you gave him eyes, declare creepily “NOW. I. SEE. YOU.” When you’re eight years old, and you’re playing pinball at your local Yellow Balloon waiting to get your hair cut, and a pinball machine declares that it can see you… Well, let’s just say that your haircut will not be the more memorable part of that halcyon 1980s afternoon. FunHouse is a pinball machine designed by Pat Lawlor and released in November 1990 by Williams Electronics. Starring a talking ventriloquist dummy named Rudy, the game is themed after the concept of an amusement park funhouse.

Williams’ Funhouse was a mainstay in most arcades, and was always in high demand. Pinball machines started going electronic as far back as 1978, but Funhouse seemed like a bizarre watershed moment in pinball tech. It was the first, at least in my hazy recollection, that had voices and sound effects. It was the first to have such an elaborate ramp system. After Funhouse, pinball machines only exploded in complexity and enjoyment.

What most people remember from Funhouse, however, is that creepy, creepy ventriloquist doll head prominently displayed in the play area. It was about the size of, well, a child’s head, complete with swiveling opening eyeballs, and a creepy mouth that would open and swallow up your ball, were you a skilled enough player. To this day, Funhouse is one of the more coveted machines. Who would have thought a creepy doll head would take you so far?

Dr. Dude and His Excellent X-Ray is a pinball machine designed by Dennis Nordman and released in 1990 by Midway (under the Bally label). The theme of the game revolves around gaining coolness.

Dr. Dude represents a strangely pure version of what every child of the 1980s wanted to be: Preternaturally cool, equipped with cool shades, big hair, busty nurses, and a hip-talking patois that only the elite (and kids from Capri-Sun commercials) could understand. Indeed, Dr. Dude even had his own backstory, as seen on the comic strip backglass of the machine pictured above.

Dr. Dude and His Excellent Ray is a weird peek into the mindset of 1980s and early 1990s cool. He’s like the logical conclusion of a journey that begins with Bill & Ted. Oh yes, and the game is also plenty fun, featuring ramps, habitrails, and, most amusing of all, a magnet to hold your pinball in place.