We’ve done games from the 70’s & 80’s and now its time for 5 pinball games from the 90’s that we like! Keep on reading for more information on these games

Creature from the Black Lagoon is a pinball machine designed by John Trudeau (“Dr. Flash”) and released by Midway (under the Bally brand name). It is loosely based on the movie of the same name. The game’s theme is 1950’s drive-in theater. The pinball game was licensed from Universal Studios by Bally so that all backglass and cabinet artwork and creature depictions would resemble those of the original movie

The main objective of the game is to collect the four letters in F-I-L-M to activate the game’s wizard mode, Rescue the Girl. They are, from left-to-right:

F: Shoot the ball into the left K-I-S-S scoop four times to collect the letter F. The letter F can also be collected on the skill shot.

L: Complete the P-A-I-D rollovers at the top right of the playfield to collect the letter L. The letter L can also be collected on the skill shot, by shooting the ball into whichever rollover is flashing.

M: Shoot the ball into the Slide (right scoop) to collect the letter M.

Additional scoring modes or methods include:

Snack Bar: When the Snack Bar is open, shooting into this scoop gives a random reward.

Playground Award: The game activates one of the following three modes at random.

tar Trek: The Next Generation is a widebody pinball game, designed by Steve Ritchie and released in November 1993 by Williams Electronics. It was part of WMS’ SuperPin series, and was based on the TV series. It is the only pinball machine that features three separate highscore-lists

The game features seven “missions/episodes” the player must complete before entering The Final Frontier:

There are various marked targets around the playfield with the Star Trek insignia. Different combinations of these are lit for different modes, indicating which shots the player needs to make. These modes are not stackable, meaning the player must complete one mission before starting another. There is a hole in the center at the top of the playfield labelled “Start Mission” which will start a mission at any time if the player makes the shot. In addition, hitting the lit “Command Decision” Target allows the player to select which mission to attempt, including already attempted missions (marked as “rerun” missions; varies from no allowable “reruns” to unlimited “reruns”, depending on the machine’s settings).

In all missions except Q’s challenge, if the player fails to complete certain objectives by losing the ball to the drain, Data will say, “Had you projected the ball along the proper trajectory, you would have been rewarded.” Pressing both flippers during this line activates an Easter egg, in which Picard will interrupt Data and say, “Thank you, Mr. Data.” The Easter egg also adds 10 million points to the score.

Another pinball from the 90’s is Super Mario Bros. a machine from April 1992, manufactured by D. Gottlieb & Co. 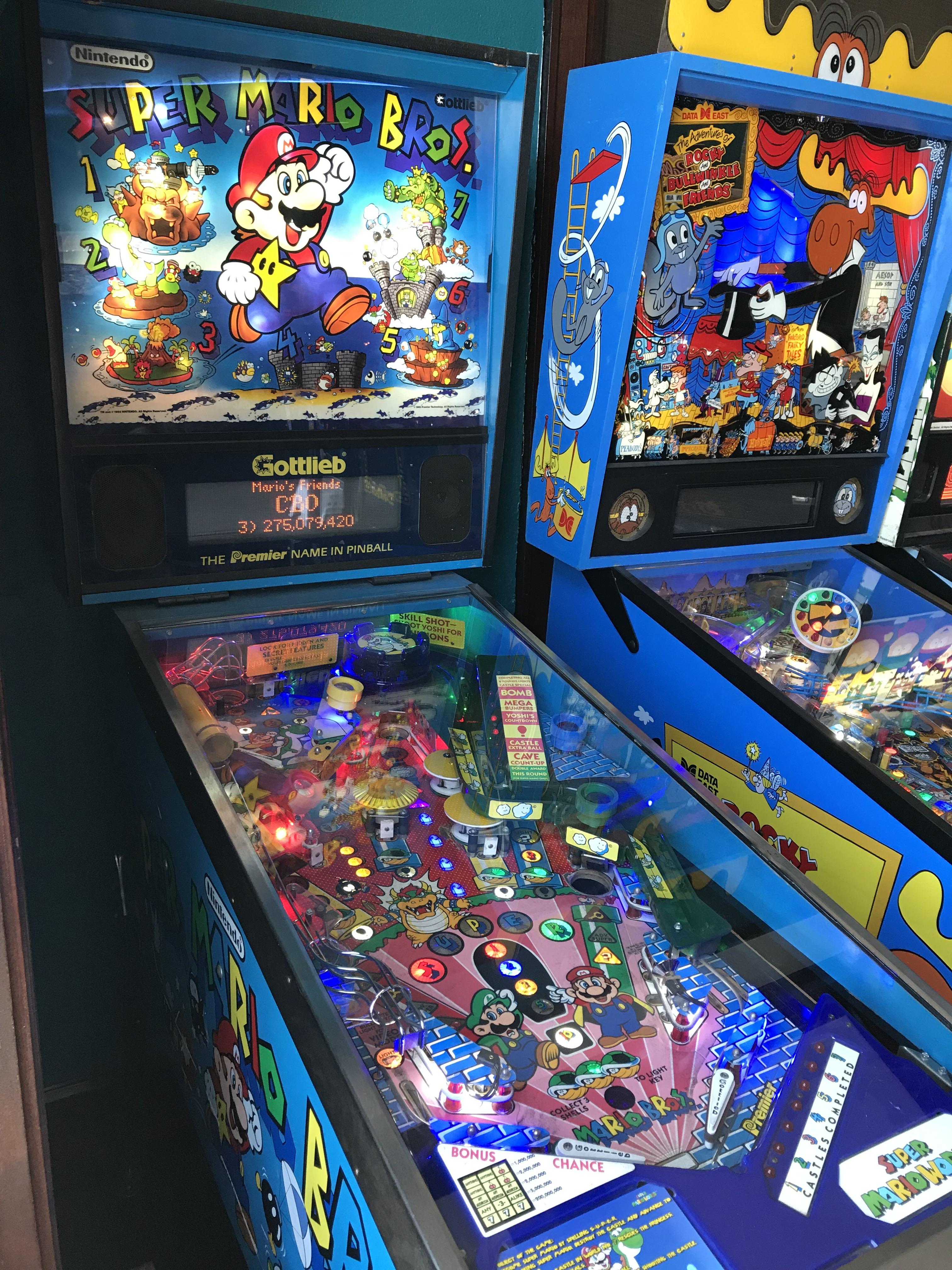 The Who’s Tommy Pinball Wizard is a pinball machine based on the rock musical The Who’s Tommy. The machine features twenty-one songs from the musical sung by original Broadway cast members. The machines were designed by Joe Kaminkow, Ed Cebula, Lonnie D. Ropp, and Lyman F. Sheats Jr.

There are three skill shot bonuses possible on the launch of each new ball. Two of which award increasing point values, and the third initiates a multiball if lit. The main game modes of the table are accessed by lighting the entire Union Jack on the playfield’s center. There are 12 mini-games in this mode based on various scenes and scores from the musical. Completing these 12 modes unlocks the Pinball Wizard multiball of six balls. By lighting the letters to spell T-O-M-M-Y then hitting one of two scoops. Depending on which scoop activates the multiball, the player is given either 3 or 4 balls. This mode has multiple subsequent stages, each awarding greater point values as jackpots

Batman Forever is a pinball machine released in June 1995 by Sega Pinball. It is based on the motion picture of the same name.

The game uses the 192×64 “supersize” dot matrix display with a Motorola 68000-based 16-bit controller. It features several electric-green wireform ramps with the “Batcave” escape ramp extending down behind the flippers and over the playfield apron, releasing balls up the playfield during multi ball. The “Batwing” cannon rotates & aims across the playfield and fires the ball with a pistol grip on front of the machine. Speech clips from the film are used. Additionally, the game had a video mode in which the Batwing is guided over rooftops, dodging obstacles to earn bonus points. 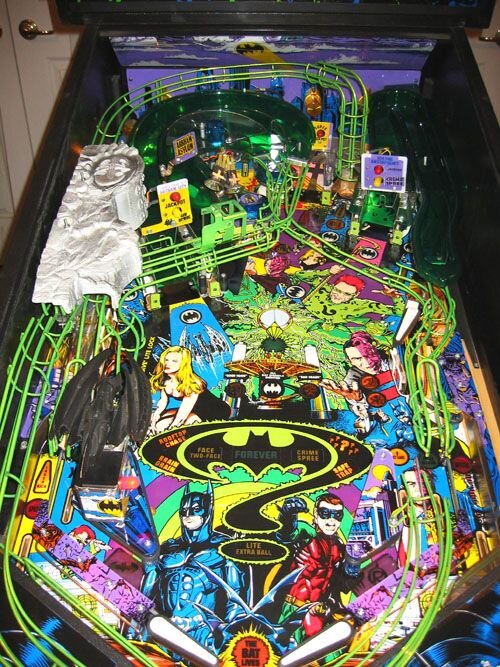