Curious about the process of making a pinball machine? Look no further, Pinball Adventures is here with some information

While a new pinball game took only 20-30 hours to manufacture, the design process was far more protracted. Designing a new game took a team of professionals from 12-18 months, and the investment cost could run up to a million dollars. Games were designed by teams, with members taking on specialized tasks. The team included a game designer, who came up with the game concept and generally organized the other members; a software developer; an artist to come up with the backglass art and playing field graphics; a mechanical engineer, responsible for the design of all the gadgets on the playing field; a sound designer to create the music and other sound effects for the game; a mechanical designer, who brought together the drawings and designs from other team members; an animator to animate images on the scoring display; an electrical engineer and a cable designer to work out the circuitry and wiring; sculptors and model-makers to build the prototype devices for the playing field, and a publications writer to write the technical documents and manuals. The team might include other people, as well, such as someone who kept track of the cost of materials, and people working in marketing, sales, and licensing.

The design work starts with a concept, which might be an original idea or might come from a licensed product, such as a movie. After the concept is agreed upon, the design team works on the layout of the playing field. Designers fiddle with placements of any special elements the game will have, and try to work out how the player will make shots leading to the element. The placement of ramps, flippers, kickers, tilt mechanisms, and such is planned out, while the mechanical engineer produces prototypes for the special elements.

After the playfield design is more or less completed, the team then produces what is called a whitewood version of the game. This is a bare plywood prototype of the 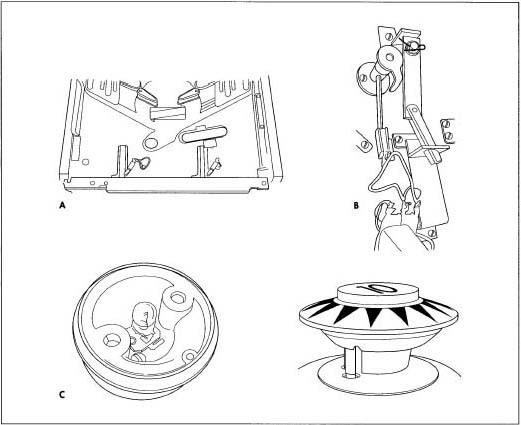 playfield. The designers use computer assisted design (CAD) software to record their plans, and this software is then used to control a computer-driven routing machine that cuts the board. The game elements for the whitewood are made by hand and glued on. Lights, ramps, and flippers are added. The whitewood may go through many revisions, as placements are changed or elements taken off or added. When the design seems satisfactory, the whitewood is wired to make it playable. Meanwhile the software developer has been creating the unique software to control the game. Williams, the last major American pinball manufacturer, had developed its own proprietary pinball operating system so that a basic framework could be used for each game, simplifying the design process. The software developer also works with the lighting and sound designers and animators to run all these effects. At the whitewood stage, the designers can actually play the game they have created, and work on developing rules.

While the game is in development, team members keep constant track of how much the game might cost to make. If parts need to be ordered from an outside vendor, the team needs to retrieve estimates from the suppliers. The game has a total budget, and sometimes the cost of one spectacular effect means that other game elements, such as lighting, have to be redesigned to make them cheaper. The design team also creates a bill of materials, listing every part needed to make the game. Parts are ordered so that everything is in place when the game is ready to be mass produced.

After the design is finalized, workers at the plant assemble 10-20 prototypes. These are completely finished games, just like ones that will eventually be sold. The prototypes help the production plant determine that all the parts fit together, that the suppliers have sent the correct parts, and that mass production will go smoothly. Any glitches in the assembly are caught at this stage. And if any part of the manufacturing process needs to be modified, it is discovered now. The prototypes are also used for testing.

The raw materials for pinball are not extraordinary. Inexpensive, sturdy plywood is used for the playfield, wiring boards, and cabinet. Metal parts, such as screws and springs, are made out of a variety of common materials, such as stainless steel and aluminum. Special elements on the playfield may be of molded plastic. Manufacturers require vendors to supply parts exactly to specifications, and to hold down production costs, which are considerable, the cheapest materials possible may be used.

Most of the quality control in pinball manufacturing is done before mass production begins. Individual parts from vendors are inspected and measured to make sure they are to specification. But the main check the manufacturer has on total product quality is in the prototypes made after the design process is complete. These 10-20 prototypes are tested in a variety of ways, including playability, general safety, and ability to withstand shipping. One is played on regularly, for field testing. One prototype is tested for sturdiness during shipping-this suffers a drop test. Another is sent to a private laboratory for a safety test, to make sure players could not be injured by the game. Other prototypes are used for publicity photographs, for the rules or manual writer, and perhaps for display at trade shows or promotions. Even after the prototypes pass inspection, the manufacturer might make a small run of some 50-100 games, just to make sure that everything is set in the production room for a bigger batch.

Thanks for reading the process of manufacturing a pinball machine!