Pinball has evolved since the early 1930’s and has continued to change and improve for the better to what it is today. The origins of pinball started with the lawn games of Europe, where balls were rolled into holes in the ground. Parlor versions of these games were called “Bagatelle” tables. To play these tabletop games, a stick or plunger would propel ball bearings up an incline. The balls would then roll down the incline, bouncing off pins and landing in pockets labelled with different scoring values. These pins gave pinball its name.

As you can see, Bagatelle was not run on electricity and had no flippers. It has made way and evolved to what pinball is today.

There are a few different eras of pinball machines:

These are the approximate years because different pinball manufacturers implement changes at different times.  Side note that a lot of pinball sources will reference “solid state” as anything using electronics (all games after the EM era are technically solid-state, even if though they have DMD or LCD display).

Electro-Mechanical (EM) pinball machines were manufactured between the 1930’s and 1970’s. EM pinball machines were systems of wired switches, relays, lights, and coils. The trademark features of EMs were electrical hums, mechanical rotating score reels, and bells that chime as points are scored. EMs did not have computers and relied on Electro-Mechanical switch logic to keep track of gameplay and scoring.
EMs predated the licensing craze of the 90’s, so a majority of the machines had original themes and artwork. The games often depicted fairy tale, gambling, sports, sci-fi, music, and western themes on the backglass and playfield.
EMs used switches instead of transistors to trigger actions, wired relays to form a program, and score motors instead of computer clocks for timing. EMs were designed to function as a hard wired “ladder” logic device.
Major pinball parts were designed during the EM era, including flippers, bumpers, kick-out holes, tilt mechanisms, and more. The last photo shows a solenoid that powers the right flipper.

In 1947, Gottlieb’s “Humpty Dumpty” completely revolutionized the industry by introducing the flipper. The game featured not two, but six, electrical flippers facing outward. Players could now use buttons on the side of the machine to keep the ball in play longer and increase their scores!

Other examples of games in the electro-mechanical era would be William’s 1976 Space Odyssey with its score reels, lack of inlanes, and abundance of relays/solenoids, El Dorado, On Beam & Sing Along 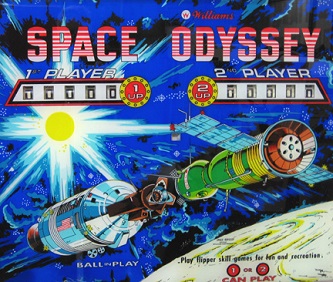 With the advent of modern computers, circuit board technology found its way into pinball machines, replacing the old-fashioned relays. These games are known as “solid state” pinball machines. This new technology allowed for more complex rules, sound effects, and immersive themes. Although Gottlieb was widely considered the best manufacturer of electro-mechanical pinball machines, Bally and Williams soon dominated the solid state pinball market. Eventually, Williams bought the Bally label and was known as the best manufacturer of that time period. Williams created the first talking pinball machine in 1979 with “Gorgar” as well as the first multi-level playfield in 1980 with “Black Knight.” 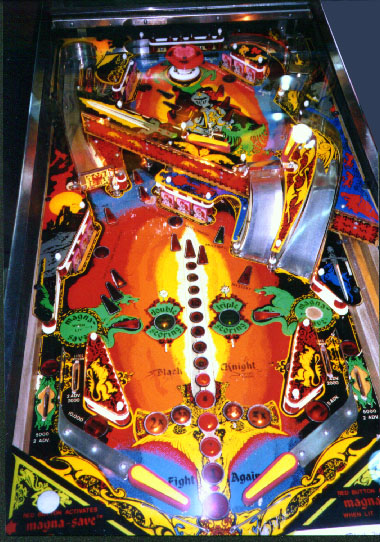 Other immersive themes from Williams during this era include their 1986 “Pinbot,” 1989 “Earth Shaker,” 1990 “Whirlwind,” and 1990 “FunHouse” (pictured below), among countless others. Pat Lawlor was the designer behind many of these games, including my favorite, “FunHouse,” which features a talking head named Rudy that comments on your game and tells you where to shoot.

The 1980s was when early solid state machines reigned in arcades, and a number of brilliant titles were released which are still sought after machines today. Some notable examples include Firepower (which featured the first ever solid state multiball mode), Eight Ball Deluxe, Centaur & Xenon. These machines are also easier to diagnose issues for, given the whole internal design of these pinball machines were simplified from their older electromechanical incarnations.

A DMD (short for Dot Matrix Display) is a part of a pinball machine which is used to show information to the player during their game like their score, active modes, animations or other information relevant to the game. When pinball machines entered the Solid State era, all pinball displays utilised segmented alphanumeric displays to display scores digitally (having replaced mechanical score reels that had been used for decades). Whilst this was serviceable for games of the time, they did have limitations as to what could be shown, especially towards the end of the 80s and early 90s when pinball machines began to become more complex with rules and speech. Even the later displays were only capable of displaying letters and numbers, and some very limited animations. Games such as Funhouse, Bride of Pinbot and Mousin’ Around are all from around this time.

In 1991 however, Data East pioneered an innovation that would change pinball forever – The first ever dot matrix display, found in their racing themed game ‘Checkpoint’. For the first time ever, a pinball display could display more than simple alphanumeric text, and display animations and tailored messages and graphical cues.

Throughout the years, there have been a number of ideas for innovations for DMD technology. SEGA for example for a few machines made the DMD even bigger at twice the height of the then-established standard size.

The most popular innovation in recent years however is the very popular Colour DMD aftermarket modification. This mode replaces the standard display made up of individual dots, and replaces it with a colour screen capable to displaying the same information, but in colour!

Today there are hundreds if not, thousands of modern pinball machines around the world. With 14 manufacturers running, and thanks to past manufacturers, Pinball will continue to rise and evolve even further. Here are the current manufacturers according to Wikipedia.  It will be 15 manufacturers soon once we are done setting up The Punny Factory! We are so excited to show you our games.